Please join us Thursday, April 4th, 2019 at our Pearl office location (1321 NW Hoyt Street, Portland, OR 97209) from 5 – 8 PM, to enjoy the artwork of Aneela Fazal. Delicious wine and appetizers will be served.

Aneela Fazal is a self taught contemporary artist whose modern compositions use color, texture and energetic brushstrokes to evoke emotion in the viewer. Her art possesses a vibrant and powerful energy, created with a carefully balanced pairing of strong and loose impressionistic painting styles. Her art has taken her all around the world with shows in Barcelona, Florence, Monte Carlo, France, Oxford and a yearly show in New York. Aneela’s recent body of work is called “Outside the lines”. The color palette for this series consists of colors that are opposites on the color wheel. The idea behind this is to look beyond perfection and to break some rules.

Aneela’s daughter is the inspiration behind “Outside the lines”. Aneela noticed her daughter’s ability to look at imperfections in a way that allowed the imagination to take over, and captured this in her artwork. Just like her color palette for this series, Aneela and her daughter are complete opposites. For example, Aneela likes to stay very organized and has a systematic way of thinking, while her daughter has taught her to look outside of the box and break some rules. The medium Aneela is using is Fluid Ink. As it comes in contact with the canvas it has a mind of its own and as an artist Aneela loves this unpredictability. 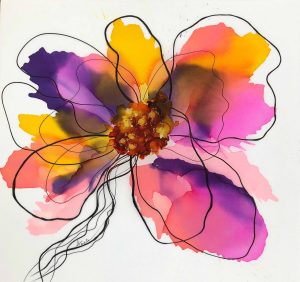 Aneela aims to draw people to her art and hopes her pieces evoke a sense of joy. Growing up as a kid, Aneela was always the one who wanted to spend hours in her room painting. Aneela could always find a reason to paint and create art, and that has been a constant throughout her life as an artist.

It’s no surprise that the Oregon Coast is a destination for food lovers. Flavors arise from the forest, the sea, the farms and the markets along the scenic coastline. Fresh, tasty, authentic and delicious are just some of the words that come to mind.

Sharing these culinary riches with visitors to the coast is the goal behind the North Coast Food Trail, launched in 2018.

The trail isn’t literally a trail, but more like a map, or perhaps a menu, guiding visitors’ way from succulent sip to tasty bite, and suggesting food-related experiences along the way.

The communities of Cannon Beach, the Tillamook Coast and Lincoln City came together to create the trail. From restaurants to cooking schools, farms to farmers market, and even lodging and retail, the trail helps you navigate the northern Oregon Coast with no danger of going hungry.

Here are a few food trail highlights to check out along your next northern Oregon Coast adventure.

Kelly’s Brighton Marina
Rockaway Beach
Here’s your chance to catch your own meal. Net a Dungeness crab from Kelly’s dock or a rental boat, and they’ll cook it up for you and your hungry team.

de Garde Brewing
Tillamook
Wild fermented, barrel-aged beers are in a trendy little tasting room in the heart of Tillamook.

Tillamook Creamery
Tillamook
This recently rebuilt headquarters of Tillamook’s famous dairy products is a grand destination full of cheese to taste, exhibits to learn from and a viewing deck into the factory itself.

EVOO Cannon Beach Cooking School and Restaurant
Cannon Beach
Owners Bob Neroni and Lenore Emery admit that teaching the craft of cooking is one of the most satisfying experiences of their career. Sign up for a class with homework that you can eat.

When Kathy Deggendorfer was a child, her family owned a beach house in the Taft district of Lincoln City. The time they spent together there and the charms of the ocean were appealing, but to Deggendorfer, the best part of the beach house was what was down the street. “The coolest thing was that there was an art supply store nearby,” she recalled. “I loved visiting that art supply store.”

Deggendorfer’s earliest artistic efforts were to gather rocks and paint them with model paint. Those days at the beach were the beginning of her lifelong, self-taught career as an artist.

Deggendorfer’s original watercolor paintings are easily recognizable due to her tendencies towards vibrant colors, cheerful themes and playful qualities. “There is a lot of angst in the world,” she said. “But my paintbrush won’t go there. There is also joy. Why not record it?”

The natural world, people at play, fishing, camping, dogs, mountains and flowers—these are the themes that turn up again and again in Deggendorfer’s work. “I love patterning,” she said. “As a member of a clothing manufacturing company, it’s all about pattern and color.”

Deggendorfer’s mother is Gert Boyle, the former president and current chairman of the board of Oregon giant Columbia Sportswear. Deggendorfer’s sister and brother are still a part of the family business, which Gert Boyle’s father founded in 1938.

While Deggendorfer doesn’t live in the Portland area and work with the company, as her family members do, the business is still in her blood. She is driven to get her creations out into the marketplace. Much of her work manifests from original paintings into usable products. Her imagery has been transferred to tiles, fabrics, greeting cards and coffee mugs. “I’m from a manufacturing family—I have to go to product,” she said.

Among other things, this approach means that her art is experienced by more people than if she concentrated on only original paintings. Her coffee mugs are held in the hands of hundreds of people each morning; her greeting cards are cheerful finds in mailboxes every day. Larger projects have come her way, too. “My hand-painted tiles have been an entre into public art,” she said. Deggendorfer’s designs grace tile installations in several Portland hospitals including the Casey Eye Institute, First Street Park in Sisters and a large bank in California. “The permanency is greater,” she said of the opportunity to create commissioned work for public display. “Plus, it gives me the opportunity to collaborate with other artists, which is what really rings my bell.”

Fabric is another recent avenue for her work. Maywood Studios, in Portland, began creating lines of fabric from Deggendorfer’s art in 2016. “When you design fabric, an element of a painting can morph,” she explained. Maywood’s designers deconstruct a painting into sub-designs, which are grouped into a collection of fabric ideal for quilt making. One line, called Quilter’s Road Trip, found some fame on a Facebook page called RV Quilters. “It was a win,” said Deggendorfer. “With the help of social media, I became the Kim Kardashian of quilting for a while.”

Art is Deggendorfer’s first love, but philanthropy is never far behind. She has an active presence in the Sisters community and a long history of giving back. She purchased the building that houses her art studio in order to open it up to other artists as an art collective. In 2002, she launched the Roundhouse Foundation, a philanthropic organization based in Sisters. The foundation took on a new layer recently, with the purchase of Pine Mountain Ranch, a 100 -year-old working ranch west of Sisters on Whychus Creek.

The ranch is home to several historic buildings, including a 1920s era dairy barn, as well as one of the last three round barns in the state of Oregon. “It’s a retreat space, a place to serve as home to artistic partnerships,” she said. Artists of all types are invited to apply for residencies—six creative artists have been hosted thus far.

As with her aspirations for her art, Deggendorfer is modest, patient and realistic—while also being incredibly determined—about her goals for the ranch and the foundation. “I don’t really know what Pine Mountain Ranch is yet,” she said. “All I can do is make this place where people can create, and talk to each other.”

As the ranch morphs and develops, Deggendorfer will keep getting her cheerful works of art out into the world, too. “Someone told me recently that drinking out of one of my mugs makes them so happy each morning. What better thing could an artist ask for?”

Oakview offers craftsman style single family homes with customized exterior features to give the neighborhood a custom built look rather than cookie cutter subdivision. The quiet streets are lined with trees, there are no homeowner’s association fees, alley access to attached garages, covered front porches and fencing is allowed. The development is ideal for families, young and old alike, but buyers should move fast–only four homes remain for sale in the development.
Home floor plans in Oakview are designed to maximize space and base models include custom features including stainless steel appliances, solid-surface countertops, hardwood floors in the kitchen and dining room, high efficiency forced air gas furnaces that are A/C ready.  The attention to detail and quality construction is apparent with each home having an individual style and three tones of paint. Full front yard landscaping with underground automatic sprinkling is also included as a standard feature. Homes are priced between $349,900 and $400,000. Home sizes range from 1,500 to 2,300 square feet.
Living in Oakview gives residents access to many amenities including schools, shopping and recreation. Mountain View High School and St. Francis of Assisi Catholic School are only minutes away. The Forum featuring Costco, Safeway, Whole Foods and many other retail shops and restaurants is within five minutes as well as Pine Nursery and Big Sky parks. St. Charles Medical Center is also closely located. Oakview residents are close to all of the outdoor benefits that the renowned mountains and lakes of Central Oregon offer: great skiing and snowboarding at Mt. Bachelor, climbing and hiking at Smith Rock and plenty of trails and beautiful areas to explore.
The following are the remaining homes in Bend’s Oakview development:
1. 2712 NE Black Oak 3 bedrooms | 2.5 baths | large bonus room | 2100 square feet | $374,900